Burkardt and Onisiwo shine – FSV with a convincing win over Augsburg

The Zerofivers celebrate their third home win of the season. Jonny Burkardt scores two and assists once on his 50th Bundesliga appearance, whilst his strike partner also chips in – Bell with a striker’s goal. 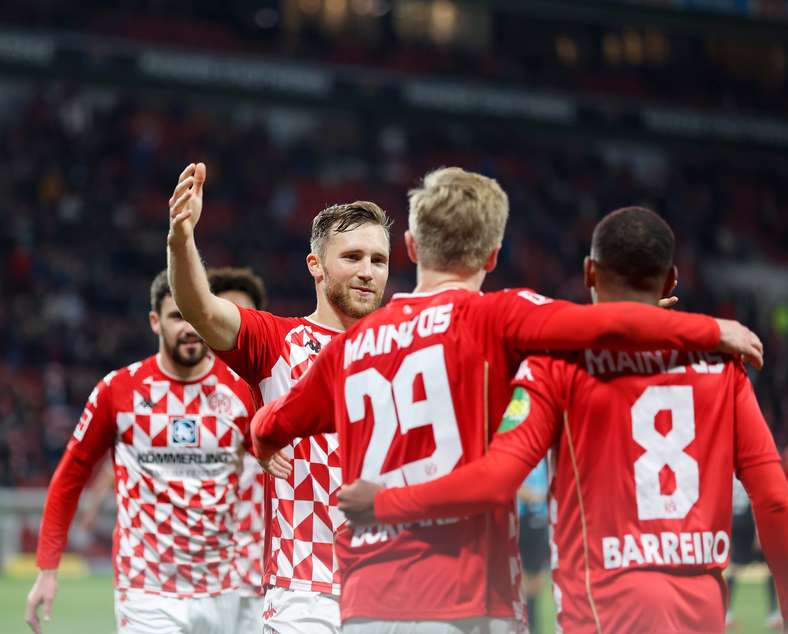 After three consecutive losses, 1. FSV Mainz 05 bounced back impressively to kick off Bundesliga matchday nine. FSV put in a blistering first half performance against FC Augsburg and deservedly came away 4-1 winners. Karim Onisiwo opened the scoring and also chipped in with two assists, before a goal from our defensive rock Stefan Bell and two from Jonny Burkardt finished things off. Andi Zequiri scored for the visitors in the second half.

Bo Svensson made five changes to the team that lost against Dortmund. Niklas Tauer, Anderson Lucoqui, Leandro Barreiro, Anton Stach and Marcus Ingvartsen were replaced in the starting eleven at the MEWA ARENA by Alexander Hack, Dominik Kohr, Aarón Martín, Jae Sung Lee and Burkardt, who was making his 50th Bundesliga appearance for FSV.

A blistering first half

The Zerofivers started quickly and had their first opportunity after just 120 seconds. Kohr fed Silvan Widmer on the right who found Burkardt in the box, but his near-post effort was kept out by Rafal Gikiewicz (2’). Just four minutes later, Mainz looked to threaten again, but Bell’s header from Aarón’s corner was cleared off the line by André Hahn (6’). The guests struggled to get out of their own half at the start of the match whilst FSV kept coming at them and were eventually deserving of their early lead. In the tenth minute, Bell and Kohr combined and quickly gave it to Widmer on the right. He crossed low into the middle and had a slice of luck as Robert Gumny missed the ball on his way back. Onisiwo was lurking behind him and the Austrian stayed cool to make it 1-0. Mainz used the momentum after the goal, kept pushing and scored again soon after. After a corner, FCA failed to take advantage of a counterattacking situation which was broken up by Jean-Paul Boëtius. He then served Burkardt who managed to find Bell in space who made it 2-0 with his 12th Bundesliga goal, slotting home through the legs of the goalkeeper (15’).

Augsburg struggled to find their way into the game, as the Zerofivers allowed them little space, all while looking for opportunities to counter. In the 26th minute, Onisiwo found Burkardt at the back post with a perfectly-placed cross as he headed home to make it 3-0. The move capped off a spectacular opening half hour for the hosts, who came close to netting a fourth shortly after. This time, it was Hack who found Onisiwo, but his header from eight meters out was saved by Gikiewicz (35’). The match continued to be one-way traffic for the hosts, as Onisiwo found Burkardt once again, but Gikiewicz was able to make the save (40’). Mainz were fully deserving of their 3-0 lead at half-time, having taken seven shots to Augsburg’s one. The Zerofivers had also covered more ground, won more challenges and enjoyed 57% possession.

Head coach Markus Weinzierl made two changes during half-time, bringing on Tobias Strobl and Andi Zeqiri for Robert Gumny and Sergio Córdova. However, the first chance of the second half came for the Zerofivers. Once again, Onisiwo was involved as he beat his marker, but sent his shot wide of goal (48’). The first real threat from the visitors came on the hour mark, as Daniel Caligiuri set up Ruben Vargas. The latter attempted to chip Zentner, but sent his shot high over the bar. Minutes later, Mainz looked to capitalise on a set-piece scenario, but Bell headed high off a corner from Aarón (61’). Svensson then brought on his first pair of fresh legs, with Barreiro replacing Lee, who had delivered a strong performance on his third league start.

FCA were then able to get on the board, as Hahn had enough room on the left wing to find Zeqiri, who snuck a shot past Zentner (69’). Mainz responded instantly, as Onisiwo and Burkardt linked up once again to score. Burkardt curled home his second of the night, bagging his first-ever Bundesliga brace on his 50th appearance to make it 4-1 (71’). Shortly after, Burkardt was subbed off to loud applause, as Ingvartsen came on. Onisiwo, meanwhile, was still hungry for more, as he had another shot saved by Gikiewicz (77‘). The striker continued to push for his second of the night, and was handed a golden opportunity as he rounded Gikiewicz, but his touch placed the ball too far wide as he was unable to slot home from a tight angle (82’). Onisiwo was then subbed out and replaced by Ádám Szalai, as he made his comeback from injury. With the game ticking to a close, Mainz continued to attack, and came close to adding to their scoreline. However, Aarón, Ingvartsen and Szalai all saw their shots saved. The mood within the MEWA-Arena was festive, as fans celebrated the result with a Mexican wave.

The Zerofivers now sit in sixth place with 13 points from nine games. Mainz will now play a back-to-back matches against Arminia Bielefeld, hosting them on Tuesday evening (20:45 CEST) in the second round of the DFB-Pokal before returning to league action in Bielefeld next weekend (30th October, 15:30 CEST).