Svensson ahead of Augsburg: “That’s the lesson of the last few games”

Mainz 05’s head coach made his messages clear on bouncing back from the team’s most recent defeat ahead of the meeting with FC Augsburg on Friday night – three sorely-missed leaders in the squad could play an important role from the start of matchday 9. 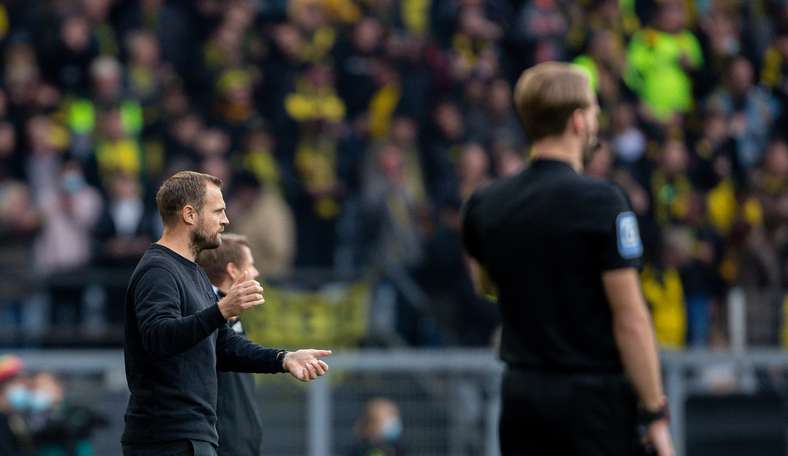 Around 17,500 fans will cram into the MEWA ARENA for Friday evening’s game, which sees the Zerofivers face FC Augsburg (20:30 CEST). Whereas this weekend’s guests have collected six points from eight games this season, Mainz have won ten points so far but are winless in their last four, but will be eager to increase the gap to their opponents in front of their home crowd.

“There’s no question that this is an important game,” said head coach Bo Svensson in his pre-match press conference. At the same time, the Dane made clear that he was much more interested in answering questions on the coaching staff and squad than about the recent lack of positive results. The lack of success can be put down to clear reasons in every game, such as phases where Svensson’s side did not put the maximum effort into the game.

All the quotes from Bo Svensson before #M05FCA:

The head coach on:

... the poor run of form with just one point from four games: “We’ve not been satisfied with our performances in general in the last few games. We had some good periods, but there were also phases where we didn’t do what was necessary to be successful. We’re working hard to change that, in terms of trying to show the players what they’re capable of when they put their minds to it. That’s what it’s all about, as it became clear that they didn’t do that in every game. That said, the results aren’t the end of the world for us.”

The potential and the quality are there, we just need to work on consistency.

... self-confidence within the team: “My task is to put the focus on what we need to do better. We have had the feeling that we could have got more out of every game, as we were equal or better than our opponents in parts of them. The potential and the quality are there, we just need to work on consistency. That’s why we’re going on about delivering consistent performances.”

... games against Augsburg: “I don’t know how pretty the game is going to be; we are two teams who see themselves pretty similarly. When two teams like ours meet, the games are usually pretty hard-fought. Of course it’s an important game for both teams, but the focus isn’t really on past meetings. For us, it’s all about reacting to the last game in Dortmund and improving, so we can put a generally good performance on for the home crowd.”

... the game’s significance: “There’s no question that this is an important game – we both have similar goals and formations, and see ourselves as having pretty similar roles in the league. That said, it’s a new game which will be decided in the details. We want to change the current run of games against FCA.”

... expectations of Augsburg: “They started the season playing differently to the way they do now and suffered a few heavy defeats. Since then, they have started playing more compactly, conceding few chances and have turned into a difficult opponent. They were very active and dynamic against Bielefeld, and I think the game tomorrow will be pretty similar.”

... new discoveries in terms of Mainz’s own game: “We asked ourselves the question: ‘When are we dangerous and when can we hurt our opponents?’, no matter whether we play a team like Augsburg or one like Dortmund. We are dangerous when we keep our tempo high and stay alert in all phases of play. That’s the lesson of the last few games. We need to play a complete game, both with and without the ball, in open play and from set pieces.”

... dealing with mistakes: “We can always learn from mistakes, and many of our problems were of a similar nature. We weren’t active or dynamic as a team, and didn’t react well enough in the phases where we didn’t perform well enough. That was the same in all the games from Freiburg to now. If we don’t learn from mistakes, it will get difficult to keep up in this league.”

That was the same in all the games from Freiburg to now.

... injuries: “Jer St. Juste (shoulder operation) is not available of course, but everyone else has been in training. We have a lot of options and competition for places. For me it’s all about finding the best mixture of ability and individual form.”

... Ádám Szalai: “He did take part in some bits of training last week, but we didn’t think he was quite ready to come to Dortmund with us. This week looks different though; he’s ready and is an option for the squad.”

... the return of leaders: “Moussa, Ádám and Dome take on a lot of responsibility, and have experienced a lot in their careers. Other players will need to be able to fit in around them. The fact that we’ve missed them is clear.”

The fact that we’ve missed Moussa, Ádám and Dome is clear.