Post-match reaction after the win over Augsburg 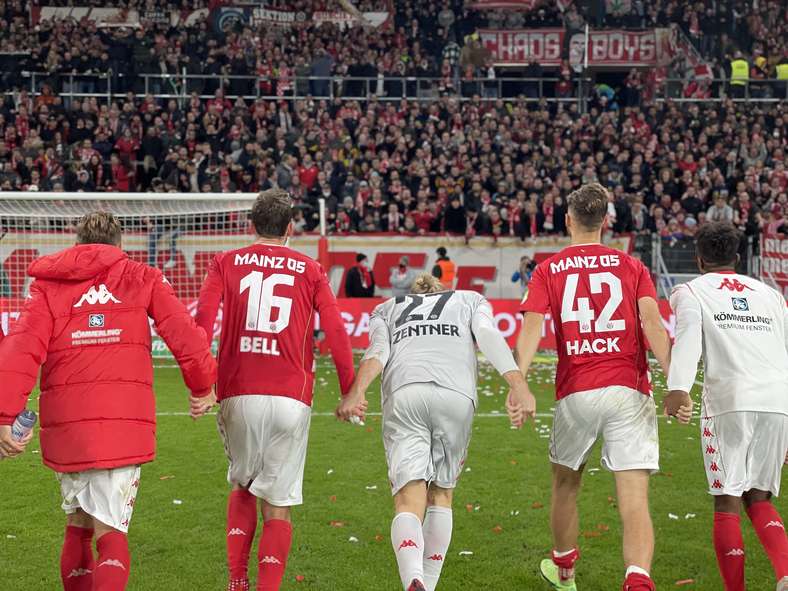 The team celebrated with the fans after the win

That was fun! Everyone was in agreement on that after the spectacle at the MEWA ARENA. FSV deservedly beat FC Augsburg 4-1 on Friday evening, and could have scored even more. As the protagonists of the game can attest, this was much needed after three defeats in a row.

Karim Onisiwo: “That was definitely a lot of fun. We had lost three games on the spin and we wanted to get the three points today in front of our fans. We managed to start really well and didn’t let them play. We put them under pressure and played good football for nearly the whole 90 minutes. In the last six months we’ve won a lot of matches by a single goal and missed chances. Today we were clinical, though we did still let a few things slip. You can see how we’re developing, Jonny scored twice, I scored and that is really positive.

Stefan Bell: “We played a bit differently at the back tonight because we expected to have more of the ball, and we wanted everyone to get the ball onto their strong side in order to build up the play, while Hacki was left free in the middle to find the gaps (laughs). That worked well. I think that we played well in possession right from the start today and managed to stay focused on our goal. We managed to have the right balance of possession and switching over quickly to attack. Our strikers also won nearly every one of their challenges and were very physical – it’s rare that we get so many chances on goal.”

Jonny Burkardt: "It was a great day and a wonderful night of football for the entire team. Personally, I’m also pleased with my performance, but there’s still room for improvement. I want to continue to work on improving my finishing – one game won’t change that. I’m happy to have gotten an assist as well. I think it was good, even if it wasn’t an easy pass for Bello to convert; he still pulled it off like a top striker would. Overall, it was important for us to play with a lot of intensity and to press high. We also didn’t really have any weak moments during the game. Now, we want to reach the next round in the Pokal and also win our next Bundesliga game against Bielefeld.”